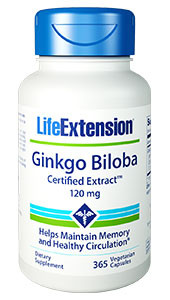 Read the entire label and follow the directions carefully prior to use.

Take one (1) capsule daily with or without food, or as recommended by a healthcare practitioner. Ginkgolic acid is an allergen found in all Ginkgo biloba extracts. The stringent German Commission E has set the ginkgolic acid limit at no more than 5 ppm. Ginkgo Biloba Extract 24/6 has been purified to contain the lowest level of ginkgolic acid possible (no more than 1 ppm).